Russian Extreme Travels, aka Trekking in Altai, aka Extreme Travels in Russia, is a tourist company doing business in Pakistan. In June 2019, ten years after her first entry into this country, Ms Olga Leonidovna Ozerova, aka Olga Sim (Ольга Сим), one of its employee/partners, took a key part, as a shadow advisor, in the start-up of a slanderous campaign against the Wakhi community of Northern Pakistan and against its western visitors. Eventually, in January 2021, she openly revealed a plan of filing a claim for terrorism, in Pakistan, against a French citizen, with the help of false witnesses. Such an interference in a third country may cause irrecoverable damages to Russian Extreme Travels business.

Russian Extreme Travels is a company with two people.

The company is run by Ms Olga Leonidovna Ozerova, aka Olga Sim (Ольга Сим) and by Ms Tatiana Stukalova. Its operations are mainly in Altai region of Russia (Siberia), under Trekking in Altai, and in Pakistan. Olga Leonidovna Ozerova is an admirer of the Soviet period and disregards European people for their judgment about Stalin's regime. Read more...


Russian Extreme Travels is at the origin of a long term hate speech campaign in Pakistan against Hunza people and against their western visitors.

In June 2019, Ms Olga Leonidovna Ozerova comforted a Pakistani female stalker, Ms Ramla Akhtar, aka Rmala Aalam from Karachi, in her radical discourse and indirectly ignited a bullying long-term offensive that she could have stopped. Since January 2021 Ms Ozerova is openly taking part in this engagement. Read more...

Russian Extreme Travels, with Ms Olga Leonidovna Ozerova, sent a blackmail, against a French Citizen, with astonishing allegations and threat of false testimonies to Pakistani Government.

To please her friend Ramla Akhtar, Ms Ozerova launched an intimidating attempt with a threat of terrorism accusations against a French citizen. She did not reach her goal. She was slammed with contemptuous strong words. Her message was made public. Her addressee did not show any will for surrendering to such a demand. Read more...

It was made evident that the allegations produced by Ms Olga Leonidovna Ozerova, aka Olga Sim (Ольга Сим) were unchecked copies of Ms Ramla Akhtar's attacks, produced over the last year and a half. They have been exposed has been the result of an unstable mind haunted by hatred, violence, islamism and racism. Read more...


Russian Extreme Travels is endangering its business in Pakistan while damaging its local network and being exposed to judicial misfortunes.

Conducting tours in the remote mountain part of a country, as difficult as Pakistan, requires the help and the support of local people. Ms Ozerova taking side with the malevolent Ramla Akhtar, who has been expelled from Gojal (Upper Hunza), because of her toxic behaviour and her physical fights with her neighbors, was a wrong move. Moreover, entering into a "Comptent of Court", if she applies the plan she presented, Ms Ozerova risks fines if not imprisonment. Read more...

Olga Leonidovna Ozerova, aka Olga Sim (Ольга Сим) and Russian Extreme Travels, aka Extreme Travels in Russia  (Экстремальные путешествия), aka Trekking in Altai are sanctioned for taking part into a calumnious denunciation and blackmail campaign under forged evidences of terrorism against a French writer and photographer.
As a consequence, their public image is devastated and Internet is being cleansed from their publications. Read more... 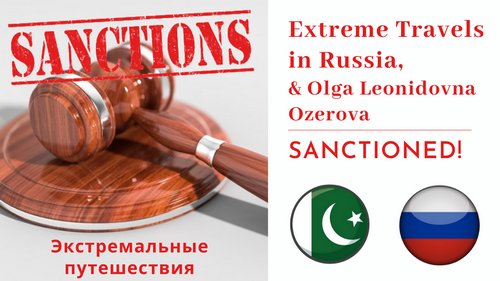 IMAGE COPYRIGHT LEGAL NOTICE
Use of the public pictures of Olga Leonidovna Ozerova, aka Olga Sim from “Extreme Travels in Russia”:« In many countries, certain uses of copyright-protected works do not infringe the copyright owner’s rights. For example, in the United States, copyright rights are limited by the doctrine of « fair use, » under which certain uses of copyrighted material for, but not limited to, criticism, commentary, news reporting, teaching, scholarship, or research may be considered fair. U.S. judges determine whether a fair use defense is valid according to four factors, which are listed here for educational purposes. In some other countries, there is a similar concept called « fair dealing » that may be applied differently».

Olga Leonidovna Ozerova from Extreme Travels in Russia, Экстремальные Путешествия: presentation of the Pakistani communities under the harassment of her partner

Extreme Travels in Russia, Экстремальные Путешествия, and its pakistani case versus a French citizen

Please note:
To enforce the freedom of speech, comments are open to everybody including anonymous contributors. They will be immediately posted without any control "a priori." However, they will be subsequently reviewed. If there is use of slang words, slanders, incitation to hatred or violence, they will be removed. Each contributor is asked to write responsibly. Many thanks for your understanding.