Pakistan; extremism as a consequence of retardation or as a modernity crisis? 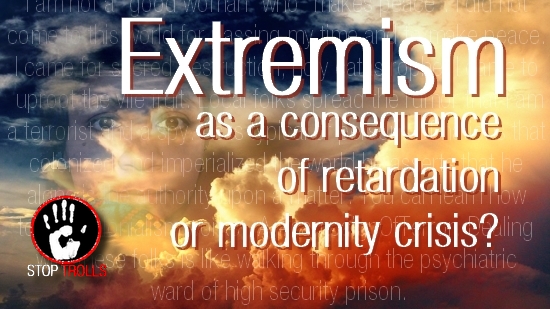 Although, twenty years ago, the deadly Trade Center attack evidenced the inclusion of a high level of technology, this warning has been largely underestimated. Islamist fanatism and terrorism are generally associated with underdevelopment, ignorance and male dominance. However, there are some clues education and social progress will not be enough to protect us from this threat. Here is an example of an original path which evidences another side of such a hybrid war.


A 2010 Youtube video shows some trendy considerations which, regardless the Urdu accent, could have been told in UK, in the USA or in Australia. It is of interest to learn who is the person making the presentation and what she became almost ten years after.

In 2010, Ms Ramla Akhtar, a Pakistani southern urban lady, with a Sunni confession, with a western life style, with a wealthy background and with a British education, called herself a "Goblal Citizen" and presented her profile as a "Social Designer", a "Communicator" being a "Humanitarian Futurist", having "Arts & media sector"," social enterprise", and an "equitable future", as areas of specialization.

Rmala Aalam, the path to radicalisation


Since 2013, this woman has renamed herself into Rmala Aalam and has entered into a radicalisation process. On her personal Facebook page and on her "mystical" Facebook blog page "Black Mountain, Dragon Soul - a Wounded Mystic Spins Her Yarn", her speech became nationalist with a xenophobia orientation against European and American foreigners. She calls them "white-supremacists" and "colonialists." Obsessed, according to her own words, with her "brown skin", she handles hate speeches against Wakhi people, a peaceful ethnic (Persian origin) and religious minority (Imailian Shia confession) living in the Karakoram range bordering the north of the country. She is, especially, targeting the family runnis Pamir Serai Guest houses in Chapursan Valley. Her recent call, dating September 16, 2019, for arming against these communities created a strong regional emotion. It has been communicated to the Pakistan Ministry of Interior and to local medias. 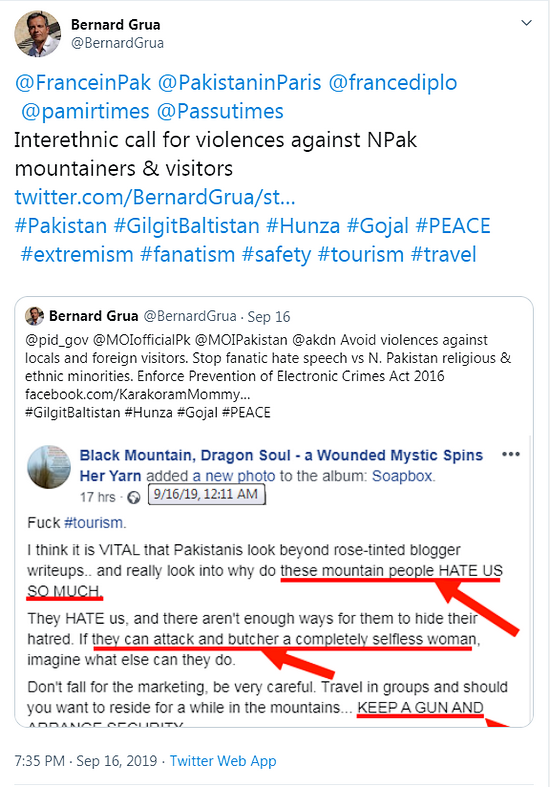 It follows a detailed alarming analysis of June 13, 2019, which was sent to Pakistani authorities: "Report of a French traveler about a domestic hate speech against the Wakhi minority of Chapursan Valley and its male international guests - credibility assessment of an alleged sexual conspiracy against local women and foreign female visitors – concerns about an emerging external extremism".


Strangely and ironically, Ms Ramla Akhtar , aka Rmla Aalam, reports a rumor saying she is a terrorist. It is one of the conspiracy theories she became familiar with. See the article: "Who dares saying Rmala Aalam, aka Ramla Akhtar, is a terrorist?" Her approach is original not only because she is a woman but also because she instrumentalises modern feminism, fight against Central-Asia patriarchy, environment concern, development considerations, religious preaches, single mother condition and non-discrimination revendications. Those hijacked causes, though a confusing mix, are the perfect smoke screen for paving the way for discord, interethnic conflicts and fanatism. They prevent any rational questioning.

It is too early to get a final view of this work in progress and how wide it will spread. The case, however, requires a strong attention and should be closely followed up. European countries should get the propers tools for identifying such profiles when they apply for an entrance visa in our countries or, who knows, for an asylum request.

Other articles of Bernard Grua about this region:

Popular posts from this blog 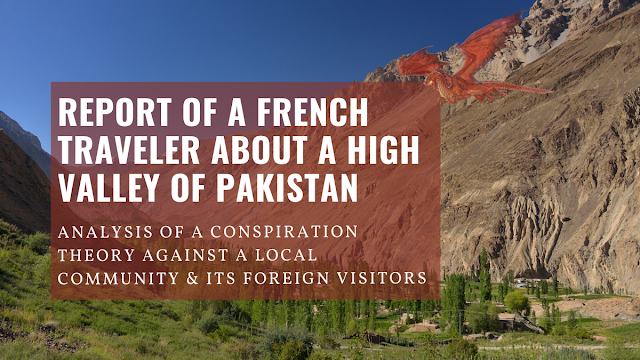 Ramla Akhtar wrote numerous posts about Chapursan Valley . They are contrary to the general opinion. Because Gojal, a region located in the northern mountainous part of Pakistan at the Afghanistan and China corner, is still not an area with a high tourist frequentation. Nevertheless, unanimous reports praise its hospitality, its peaceful people and its pristine environment. The Facebook blog page “Black Mountain, Dragon Soul - a Wounded Mystic Spins Her Yarn" exposes a different point of view. While Ramla Akhtar (aka Rmala Aalam), the contributor of this blog, is a local resident with an external background, it is of importance to review what she reveals of a risks faced, according to her, by solo female travelers in Chapursan Valley. We will look to the sources and inspirations of such a novel. We will try to separate what is part of ancient myths and what pertains to the today reality or imagination. Then, we will learn more on how the shock of cultures and traditions between
Lire plus/Read more »

At the knot of past empires: Zoodkhun, a Wakhi village in the high Chapursan Valley of Pakistan

At the top of Upper Hunza in an area called Gojal, Zood Khun stretches in Chapursan Valley . It is a village having numerous characteristics in common with other Wakhi settlements of Pakistan, Afghanistan, Tajikistan and, may be, China (though, not directly observed in this last country). However, its isolation at the very end of a narrow dirt road, coming from Sost, and its altitude of 3,300 m, make it, sometimes, different in term of tradition resilience, scenery, available resources and way of life. The following description will try to show this specificity as to project it into a more general background. May some readers decide to visit this interesting place, to discover its peaceful beauty, and to enjoy the cordial hospitality of its friendly inhabitants. Table of content Part 1 - Zood Khun preserves a scenic and authentic oasis landscape Part 2 - Zood Khun ressources are limited but represent tangible assets Part 3 - Zood Khun sources of past and present religious traditio
Lire plus/Read more »